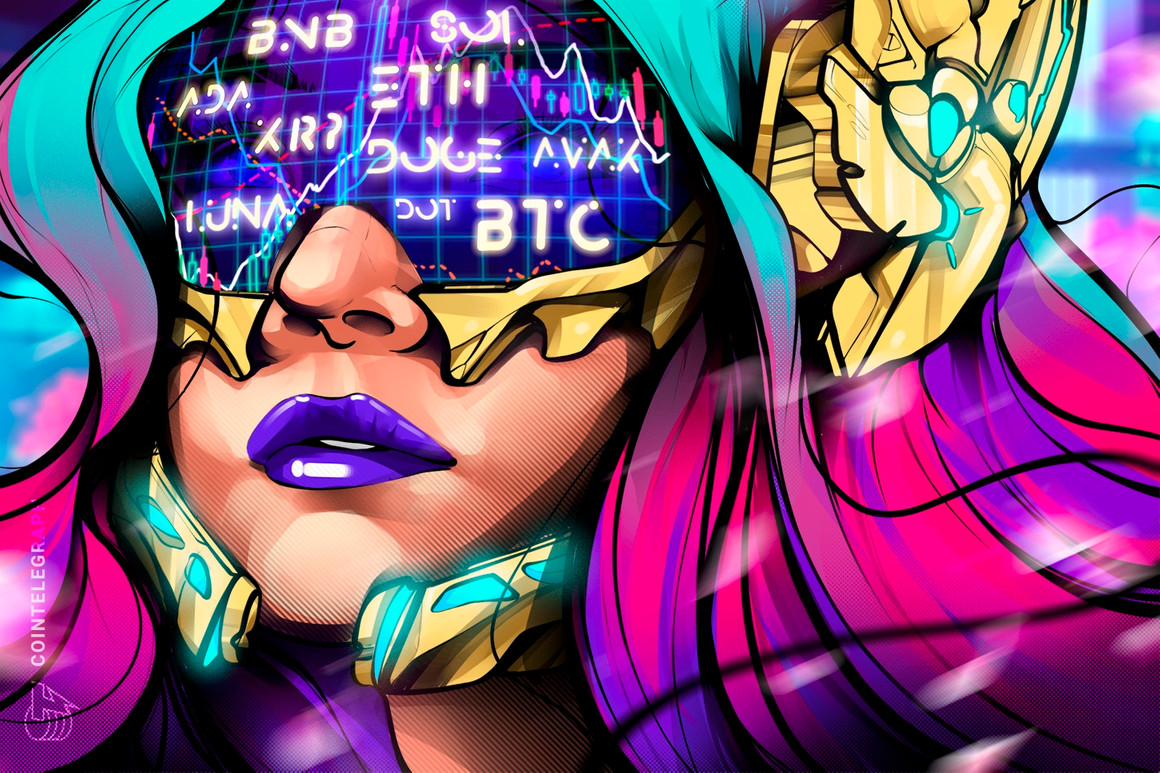 Bitcoin (BTC) is attempting to form a higher low as investors take advantage of lower levels to accumulate. Twitter user PlanC recently highlighted that the balance of addresses having at least two significant incoming transactions but no outgoing transactions has soared to a 57 month high.

However, not everyone is bullish on the future prospects of Bitcoin. Popular analyst Ari Rudd presented three long-term technical setups, which point to further downside in Bitcoin. Rudd believes that Bitcoin could offer a buying opportunity in the $24,000 to $27,000 range.

Data compiled by Bloomberg shows that Bitcoin price has been calmer compared to the Nasdaq 100 index in 2022. There have been only five occasions this year when Bitcoin has moved more than one standard deviation from its average in either direction, while the Nasdaq 100 has seen 12 such moves.

Generally, periods of low volatility are followed by range expansion. Hence, traders may remain cautious because a sharp drop in the Nasdaq 100 could accelerate selling in Bitcoin.

Let’s study the charts of the top-10 cryptocurrencies to spot the critical support and resistance levels.

Bitcoin is attempting to rebound off the 20-day exponential moving average ($41,493), indicating that the sentiment has turned positive and traders are buying on dips.

The bulls will attempt to push and sustain the price above the overhead resistance at $45,821. If they manage to do that, the BTC/USDT pair will complete a bullish inverse head and shoulders pattern.

The pair could first rally to the psychological level at $50,000 and if this level is crossed, the rally may reach the stiff overhead resistance at $52,088.

Contrary to this assumption, if the price turns down from the current level or the overhead resistance, it will suggest that bears continue to sell on rallies. The pair could then drop to $39,600. The bears will have to pull the price below this support to gain the upper hand.

Ether (ETH) plunged below the 20-day EMA ($2,934) and re-entered the descending channel on Feb. 11, indicating selling at higher levels. A minor positive is that the price has been clinging to the 20-day EMA in the past two days.

The flattish 20-day EMA and the relative strength index (RSI) just below the midpoint suggest a balance between supply and demand. If the price breaks and sustains above the 20-day EMA, the buyers will make one more attempt to push the ETH/USDT pair above the overhead resistance zone at $3,283.66 to $3,411.43.

If they succeed, the pair will complete an inverted H&S pattern. This reversal setup has a target objective at $4,408.

On the other hand, if the price once again turns down from the overhead resistance, it will suggest that bears continue to sell on rallies. That will increase the prospects of a drop to the strong support at $2,652.

Binance Coin (BNB) broke and closed below the 20-day EMA ($407) on Feb. 11, indicating that traders who bought at lower levels may be booking profits.

However, a minor positive is that the bulls have not allowed the bears to have their way and are buying the dips below $400. The 20-day EMA is flat but the RSI has dropped near 47, suggesting a minor edge to the bears.

If the price sustains below $400, the possibility of a drop to $347.40 increases. This negative view will invalidate if the BNB/USDT pair turns up from the current level and breaks above the 50-day simple moving average ($439). The pair could then start its journey toward the psychological level at $500.

Ripple’s (XRP) sharp rebound off the breakout level at $0.75 turned down from $0.85, indicating that bears are selling on rallies. The bears will now attempt to pull the price below $0.75.

If they manage to do that, the selling could intensify as traders who bought at lower levels or on a break above $0.75 may rush to the exit. That could pull the XRP/USDT pair to $0.65 and then to $0.60.

On the other hand, if the price rises from the current level or rebounds off $0.75, it will suggest that bulls are accumulating near the breakout level. The buyers will then make one more attempt to resume the up-move by pushing the price above the $0.85 to $0.91 resistance zone.

Cardano (ADA) broke below the 20-day EMA ($1.11) on Feb. 11 and has reached the strong support at $1. The repeated retest of a support level tends to weaken it.

The downsloping moving averages and the RSI in the negative territory indicate that bears are in control. A break and close below $1 could signal the resumption of the downtrend. The ADA/USDT pair could then drop to $0.80.

Contrary to this assumption, if bulls once again manage to defend the $1 support, the pair will attempt to rally above the moving averages. The buyers will have to push and sustain the price above the channel to indicate a possible change in trend.

Solana (SOL) continues to trade inside the descending channel pattern and is gradually correcting toward the strong support at $80.83. The 20-day EMA ($106) has started to turn down once again and the RSI is in the negative territory, indicating that bears have the upper hand.

The SOL/USDT pair could now slide to the strong support at $80.83. This is an important level to watch out for because if it cracks, the selling could intensify and the pair could drop to the support line of the channel.

On the contrary, if the price turns up from the current level or rebounds off $80.83, the bulls will try to push the pair to the resistance line of the channel. A break and close above this level will be the first sign that the downtrend could be over.

Terra’s LUNA token has been trading below $54.20 for the past three days but a minor positive is that the bulls have not allowed the price to break and sustain below the psychological level at $50.

The first sign of strength will be a break and close above the 20-day EMA ($56) which will indicate that the bears may be losing their grip. The bulls will then attempt to push the price to the downtrend line of the descending channel where the bears may again pose a stiff challenge.

Conversely, if bulls fail to push the price above the 20-day EMA within the next few days, the selling could intensify and the LUNA/USDT pair could slide toward the strong support at $43.44. The downsloping moving averages and the RSI in the negative territory indicate that bears have a slight advantage.

The 20-day EMA is flattish but the RSI has dipped below 47, indicating that bears are attempting to gain the upper hand. If sellers sink the price below $0.14, the DOGE/USDT pair may decline to the critical support at $0.12.

Contrary to this assumption, if the price turns up from the current level and breaks above the moving averages, it will suggest that bulls are accumulating on dips. The buyers will then try to push the pair above $0.17 and extend the up-move to $0.22.

Avalanche (AVAX) turned down from the downtrend line on Feb. 10 and has dipped to the uptrend line, indicating that the traders who bought at lower levels may be exiting their positions.

The 20-day EMA ($79) is flat and the RSI is just above the midpoint, indicating a balance between supply and demand. If the price breaks and sustains below $75.50, the possibility of a drop to $64.85 and then to $61 increases.

Alternatively, if the price rebounds off the current level, the bulls will again try to drive the price above the downtrend line. If they succeed, it will signal that the downtrend could be over. The pair could then rise to $100 and later to $117.53.

Polkadot (DOT) turned down from the downtrend line on Feb. 8 and could now drop to the strong support at $16.81. Both moving averages have started to turn down and the RSI is in the negative territory, indicating that bears are in command.

If bears pull the price below $16.81, the selling could pick up further and the DOT/USDT pair could drop to the next major support at $10.37. Contrary to this assumption, if the price rebounds off the current level or $16.81, the bulls will attempt to push the pair above the downtrend line.

If they manage to do that, the pair could rise to the overhead resistance at $23.19. If the price turns down from this level, the pair could remain range-bound for a few more days. The bulls are likely to gain the upper hand on a break and close above $23.19.